An account identifies a participant in an EOSIO blockchain. A participant can be an individual or a group depending on the assigned permissions within the account. Accounts also represent the smart contract actors that push and receive actions to and from other accounts in the blockchain. Actions are always contained within transactions. A transaction can be one or more atomic actions.

Permissions associated with an account are used to authorize actions and transactions to other accounts. Each permission is linked to an authority table which contains a threshold that must be reached in order to allow the action associated with the given permission to be authorized for execution. The following diagram illustrates the relationship between accounts, permissions, and authorities. 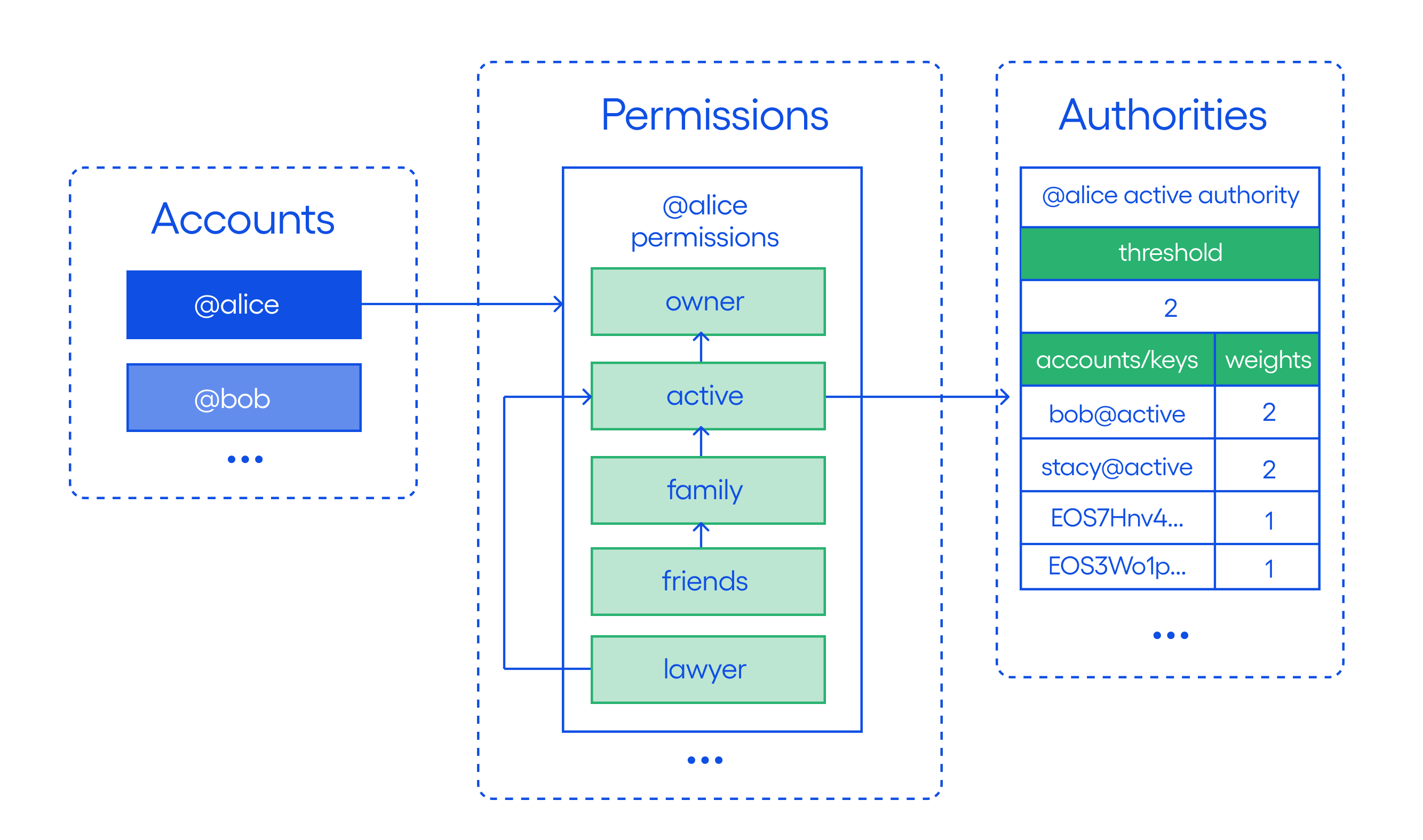 The example above depicts alice's account, her named permissions along with their hierarchical dependencies, and her linked active authority table. It also shows that a weight threshold of two must be reached in alice's active authority in order to allow an action associated with the active permission to be executed by or on behalf of alice.

Each account is identified by a human readable name between 1 and 12 characters in length. The characters can include a-z, 1-5, and optional dots (.) except the last character. This allows exactly one exa (260) accounts minus one:

Ownership of each account on an EOSIO blockchain is solely determined by the account name. Therefore, an account can update its keys without having to redistribute them to other parties.

Besides the account name, the blockchain associates other fields with each account instance stored in the chain database, such as ram quota/usage, cpu/net limits/weights, voter info, etc. (see account schema below). More importantly, each account holds the list of named permissions assigned to it. This allows a flexible permission structure that makes single or multi-user authorizations possible (see 3. Permissions).

The name type consists of a 64-bit value that encodes alphanumeric characters into 5-bit chunks, except the last character, if any, which uses a 4-bit chunk. The name type is used to encode account names, action names, etc. The time_point type stores timestamps in microseconds. The asset type associates a currency or token symbol with a given amount. The account_resource_limit type keeps track of the amount used, available, and maximum that can be used in a given window for the given resource (NET or CPU). The permission type holds the list of permission levels associated with the account (see 3. Permissions).

Besides identifying participants in an EOSIO blockchain, actions and transactions are the other reason for accounts to exist. An action requires one or more actors to push or send the action, and a receiver account to whom the action is directed. A receiver account is also needed when leaving proof, in an action receipt, that the action was pushed to the intended recipient.

In contrast, transactions are agnostic to accounts, although there is an indirect link to them through their associated keys. Transactions are signed using one or more signing keys belonging to the one or more actors involved in the actions that form the transaction. This can be the receiving account itself or other authorized actors specified on the authority table from the receiving account's permission.

Every account has two default named permissions when created, owner and active. They have a parent-child relationship by default, although this can be customized by adding other permission levels and hierarchies.

EOSIO allows to create custom hierarchical permissions that stem from the owner permission. This allows finer control over action authorizations. It also strengthens security in case the active permission gets compromised.

Every authority table linked to a given permission lists potential "factors" explicitly used in the evaluation of the action authorization. A factor type can be one of the following:

The potential actors who may execute the action are specified by either public key or account name in the authority table. Time waits are special factors which are satisfied by publishing a transaction with a delay in excess of the defined time. These carry weights as well that may contribute to satisfy the threshold.

Authorization over a given action is determined by satisfying all explicit authorizations specified in the action instance (see Transactions Protocol: 3.4.3. Action Instance). Those are in turn individually satisfied by evaluating each "factor" (account, public key, wait) for satisfaction (potentially recursively) and summing the weights of those that are satisfied. If the sum equals or exceeds the weight threshold, the action is authorized.

The authority table for alice's publish named permission is shown below. According to its contents, in order to authorize an action under that permission, a threshold of two must be reached. Since both bob@active and stacy@active factors have a weight of two, either one can satisfy the action authorization. This means that either bob or stacy with a permission level of active or higher can independently execute any action under alice's publish permission.

Alternatively, it would require two acounts with public keys EOS7Hnv4iBfcw2... and EOS3Wo1p9er7fh... to satisfy the action authorization. This is because each public key has a weight of 1 in the authority table.

Once validated, the set of recovered keys are provided to the authorization manager instance along with the amount of time "waited". The authorization manager then proceeds to check whether the provided "factors" satisfy the authorities, potentially recursing into other linked permission levels/authorities (see 3.2. Authority Table and Transactions Protocol: 3.4. Verify Transaction for more information).