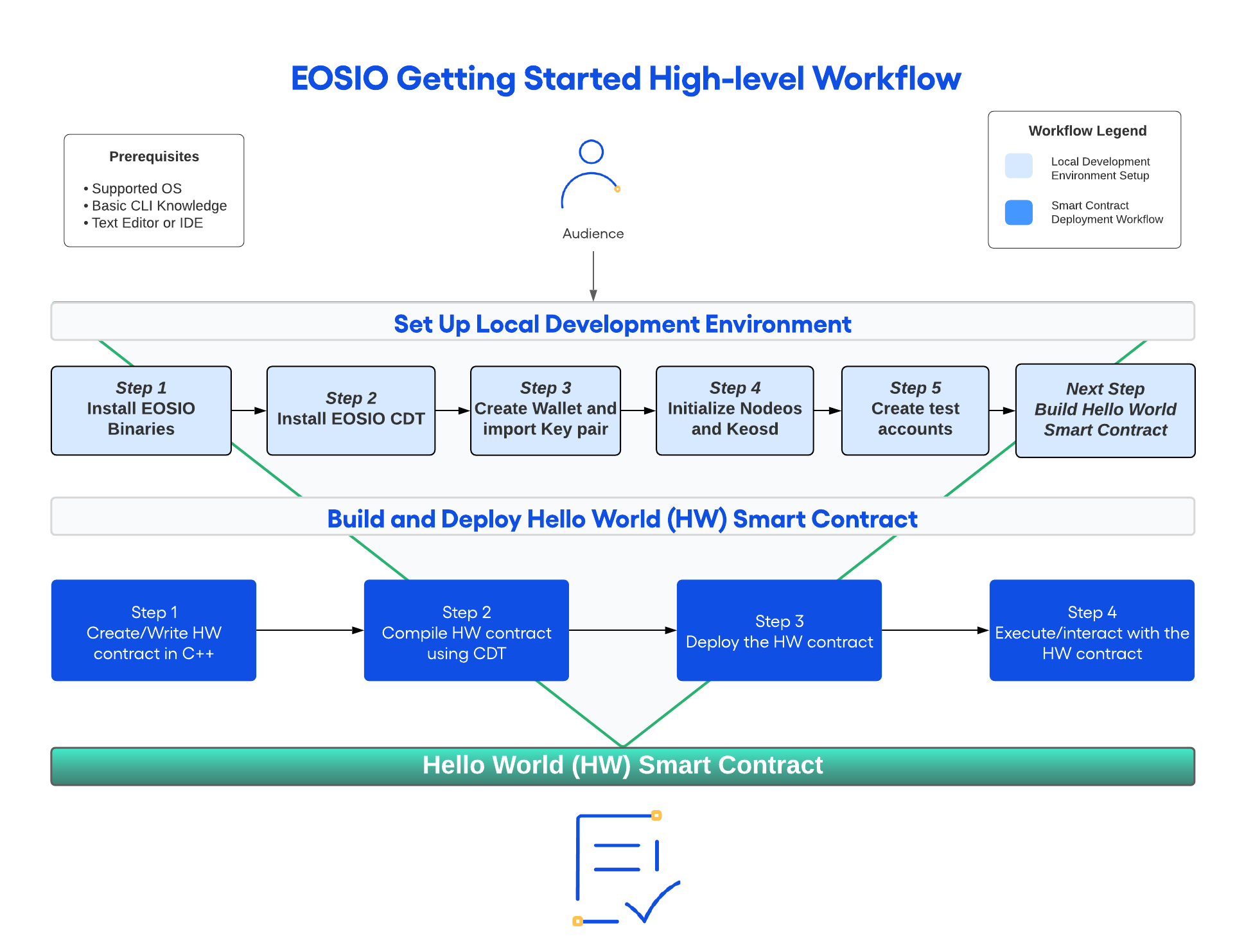 Before you begin with the getting started workflow, make sure you familiarize yourself with EOSIO Platform and Toolchain, Core Concepts, and some of the Technical Features.

Installing EOSIO prebuilt binaries is a convenient method for beginners. If you want to try advanced build methods, see Installing from Source.

After your local development environment is fully configured, you are ready to build and deploy your first Hello World Smart Contract on the EOSIO blockchain platform.

The following documentation resources will help you gain advanced technical knowledge and functional understanding of the EOSIO platform. Additionally, you can explore advanced configuration options available for development environments.

Developed for EOSIO for Business, these comprehensive courses cover the foundations of EOSIO, smart contract programming, application development and security best practices for integrations. The courses are currently available to all the EOSIO community. Sign up for free access until January 31, 2021.

In this section, we describe the base components and protocols used in the EOSIO platform. EOSIO Core provides the basic building blocks for the system layer and because they are not implemented as smart contracts they do not provide the same level of flexibility. Nevertheless, the core implementation is also open source and thus it can be modified as well to suit custom business requirements. Follow this link Protocol Guides to read more about EOSIO Core.

The EOSIO platform provides a blockchain platform and a key feature of the EOSIO platform is flexibility. Smart Contracts are part of this flexibility. Many features are implemented using smart contracts, and smart contracts can customize blockchain behavior. Some examples are consensus, governance, and resource models. For more information see eosio.contracts and the bios boot sequence tutorial.

There are several ways to configure a Nodeos environment for development and testing. Which option to use largely depends on what the project goals are. Some practical options are provided below.

Block producers operate in a distributed and/or decentralised environment. A block producer may run many instances of Nodeos and these may be in one of two modes:

Producing Nodes are configured for block production. They connect to the peer-to-peer network and actively produce new blocks. Loose transactions are also validated and relayed. On mainnet, Producing Nodes only produce blocks if their assigned block producer is part of an active schedule.

Non-Producing Nodes connect to the peer-to-peer network but do not actively produce new blocks; they are useful for acting as proxy nodes, relaying API calls, validating transactions, broadcasting information to other nodes, etc. Non-Producing Nodes are also useful for monitoring the blockchain state.

Use plugins to extend, or specialize, the behaviour of nodeos and kleosd. See the Plugins section to learn more.

The main components of the EOSIO platform.